Hardware costs for solar have substantially dropped over the past years. Solar module prices have decreased by 70% from 2010 to 2012. The attention is now directed towards soft costs and financing. An NREL study published in September 2013 analyzed the increasing share of soft cost in PV projects. Among those “non-hardware balance-of-system costs,” transaction and financing costs are emerging as one potential leverage to reduce the overall share of soft costs. Beyond existing third-party financing, more complex structures are required to cut down those transaction costs. 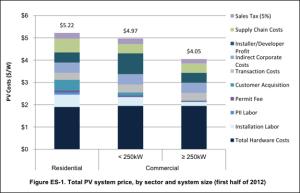 Innovative models such as crowdfunding along with tax equity for larger projects have democratized investments in renewables. But the price of financing still remains quite high. New financing structures for clean energy appeared since 2012, such as Yieldco, MLPs, and REITS. All these vessels were actually pre-existing on the finance markets but had never been applied to renewables or energy efficiency. Read more via New Financing Structures For Clean Energy.

This site uses Akismet to reduce spam. Learn how your comment data is processed.